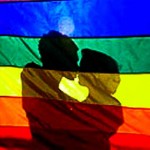 Rio de Janeiro is widely regarded as one of the most gay-friendly cities in the world and is a haven for LGBT travel. In Rio, the weather is hot and the people are hotter! Add to the mix the uninhibited atmosphere of Rio Carnival, and the “Marvelous” City quickly transforms into the “Fabulous” City as LGBT tourists from across the globe flock to Brazil for the greatest party on the planet! Throughout the week of Rio Carnival there are numerous events that cater to a gay crowd and even more hotspots LGBT visitors are highly encouraged to check out. 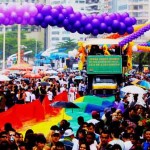 While the most spectacular floats, costumes and performances happen at the main Sambadrome Parades, Rio Carnival in the street is a wild and free experience you can’t afford miss when you’re visiting Rio de Janeiro during Carnival — not that you could miss it if you tried! The Rio Carnival Street Parades are one of the many highlights of the entire week-long series of events, and there are a few of them in particular that are enormously popular among gay crowds.

The most popular Street Parade for both LGBT tourists and native Cariocas is the Banda de Ipanema parade, which brings out a wild crowd of upwards of 50 thousand party-goers from all over the world. Dating back to 1965 when Brazil was still under a military dictatorship, the main attraction of Banda de Ipanema today is the colorful parade of drag queens and others dressed in outrageously fabulous costumes! However, the appeal of the parade does not just come from the people who are marching in it. A tightly-packed crowd takes to the streets of Ipanema as they dance and flirt in one of the most intoxicating environments of Rio Carnival. 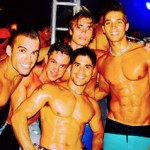 Rio Carnival 2021 will feature hundreds of balls and dance parties, many of which will be gay-themed. The Gay Ball at the Scala Nightclub in downtown Rio is one of the more popular of the Gay balls and is deeply engrained in Rio Carnival tradition. Another gay ball that has increased in popularity in recent years is the Devassa Ball at the Jockey Club — and there are smaller Gay Balls held at nightclubs (like Le Boy and Elite) and other venues throughout the city.

Taking place on the last night of Carnival, the Scala Gay Ball is considered by many to be the grand finale of Rio Carnival Balls. Rio is an incredibly tolerant society and Cariocas are known for their acceptance of all people and cultures, making the Scala Gay Ball a popular event amongst homosexuals and heterosexuals alike.

The Gay Scala Ball is often televised throughout the nation as the Scala Nightclub swaps out its traditional red carpet for an appropriately colored pink one. As guests arrive in the most fabulous of Carnival costumes, everyone vies for the attention of the paparazzi. You can purchase your Scala Gay Ball tickets today on RioCarnival.net! 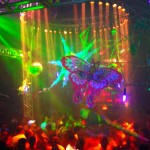 Aside from the pulsating beat of some of the best electronic music from around the world, the Rio Carnival circuit parties are great if you’re in the mood for some of the most scrumptious eye candy around. The circuit parties attract a hot crowd as they are the parties-of-choice for many of the barbies, the local term used for toned gay muscle boys. In the 1980s, the first circuit parties of Rio Carnival took place at Tivoli Park — close to Lagoa. Today’s circuit parties take place all around Rio de Janeiro in warehouses, on the beach, on a farm, or even in abandoned railway station.

The best circuit parties of Rio Carnival started in the early 90s and have continued each year. B.I.T.C.H, which stands for Barbies in Total Control Here, usually takes place in Barra but has also taken place in an abandoned railroad station downtown. World-renowned DJ Offer Nissim played at the B.I.T.C.H party for Rio Carnival 2021.

Famous Rio de Janeiro nightlife producer Rosane Amarai throws some of the best circuit parties of Rio Carnival — and during the sizzling heat of the Rio de Janeio summer, it only helps that they take place around a pool! These parties include “The Original Brazilian Pool Party” (multiple editions on different days, during the day and at night) and R:evolution. Rosane Amarai’s parties attract crowds numbering in the thousands and are known to feature hot go-go dancers, celebrity guests, world-class DJs take place around the port of Rio. Last year’s “The Original Brazilian Pool Party” had more than eight tons of equipment including high-tech sound systems and absolutely ridiculous light shows. 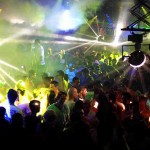 Another of the more popular circuit parties, X-Demente, is usually held on Carnival Saturday and Tuesday in either Fundição Progresso in Lapa, or in Marina da Glória along Guanabara Bay. The X-Demente circuit parties have Rio de Janeiro’s gay community coming out in droves and attracts some of the best DJs and international celebrities like Ru Paul and Jeff Stryker. Buati is a circuit party at Club Erótica, which on regular days is a strip club. Buati brings out a particularly fashion-oriented crowd, but during Rio Carnival is popular among a wider range of people. Other hot gay circuit parties that will take place over Rio Carnival include Salvation, Maxima, the White Party and Val-Demente.

Many of the larger and more established circuit parties are planned well in advance and tickets will go on sale a couple months before Rio Carnival, but for some of the other circuit parties, it’s best to ask around, talk to one of the promoters on the beach, look for flyers in boutiques, or check in the entertainment section of the newspapers. 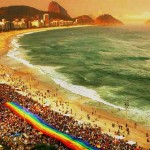 The beach is an important element of the social and cultural lives of Cariocas; for the LGBT community, this is especially true. The beach is a place to meet, cuddle, play, tan or show off your rock-hard body — and if you aren’t as toned as Brazil’s infamous Barbies, it can be enough just to sit and admire. The beach is also a place to find out about the hottest parties, as there will be cute gay club and party promoters making their rounds handing out flyers and selling tickets to some of the best events and parties of the night. Oftentimes some of these parties will take place on the beach. The gay beaches at Ipanema are popular all year long, but during Rio Carnival, like most everything else in Rio, the action at the beach is taken to new heights! 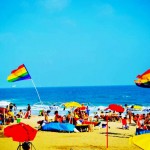 If you’re staying in a South Zone hotel, undoubtedly one of the first things you’ll want to do is head over to Farme de Amoedo, the world-famous gay beach in Ipanema. To get there, walk slightly east of Rua Farme de Amoedo until you see the rainbow flags and thousands of hot guys standing or cruising around between the umbrellas at Posto 9 (life guard tower 9). The beach is located between Postos 8 and 9 right next to the Ipanema Plaza Hotel — a particularly gay friendly hotel.

According to Grindr, the gay beach at Ipanema was elected the best beach in the world for LGBT people! The beach at Farme de Amoedo is where the barbies (the local term for muscle men) and pretty boys come after working out at the Body Tech gym just around the corner. Farme Gay, as it is often referred to by cariocas, is such an important gay hotspot that even the local vendors fly the rainbow flag. While at Farme Beach, there’s no need to hide your sexuality. You’ll find gay and lesbian couples holding hands, cuddling and kissing, as showing affection is commonplace and perfectly acceptable at the beach at Farme de Amoedo.

If the barbies of Ipanema’s Farme Gay beach are not your type, or if you’re in the mood for something different, you can take a short walk down the beach to Copacabana. The gay beach is located right in front of the Copacabana Palace Hotel in an area known as the Bolsa. This beach attracts drag queens, bears and trannies looking to bathe under the beautiful Brazilian sun. The vibe at the Bolsa is much less “cruisier” than the atmosphere at Farme Gay, so while you’re more likely to meet new friends or get picked up at Ipanema, Copacabana is a great place to relax and enjoy yourself. Though during Rio Carnival, both beaches will be crowded beyond belief with boys and girls of all shapes and sizes.

After a morning, afternoon or entire day at the beach, head over to the heart of gay Ipanema at Farme de Amoedo Street, which runs from Vieira Souto Avenue and ends at Alberto de Campos Street. Busy during the day and at night, you’ll find a plethora of shops, bars, nightclubs, restaurants and cafes that cater to a gay clientele. Taking a stroll down the Farme Block (the broader area around Rua Farme de Amoedo) will land you at Cafeina e To Nem Ai (a popular spot for some cocktails at the beginning of the evening), Dama de Ferro, W, Café Felice, and Galeria Café, some of the most frequented gay hotspots in Ipanema. Bofetada, Le Boy, and TV Bar are also located along Farme Block.

So Many Options… Where do I go? 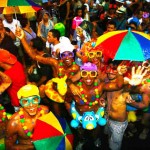 There are many ways to hear about which clubs, bars and circuit parties are hot on any given night. When you’re at the beach, pay attention to the flyers the cute boys are handing out. Oftentimes they’ll lead you to some of the best parties of the night. You will also find flyers at the boutiques, cafes and shops throughout Ipanema, Leblon and Copacabana. Or you can just ask around. Stop the cutest guy you meet on the beach and ask him where he’s going that night — and don’t be surprised if he invites you out with him and his friends! Another good way of finding out where the best place to go is to consult a newspaper or magazine. Check out the entertainment section of the weekly Veja Rio or the Jornal do Brasil or O Globo newspapers in the “Festas” section.

The gay bars and nightclubs throw huge parties and balls during Rio Carnival. There are a number of bars and nightclubs all throughout Rio de Janeiro — and most are concentrated in Copacabana, Ipanema and Leblon. The gay nightlife scene in Rio gets started late — really late — so you shouldn’t expect things to really get underway until at least after midnight. It’s not a bad idea to have something planned before hitting the clubs. 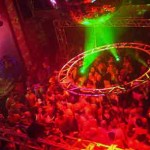 Though no plans have been announced as of yet, there is typically a big party at “The Week” on Carnival Saturday and Tuesday. The Week is one of the relatively newer gay clubs in Rio and is located in the Rio de Janeiro Centro district (downtown). It is known to attract a crowd of cute boys and muscular barbies — and during Rio Carnival, herds of international visitors!

During Rio Carnival, Le Boy, a staple of Rio’s gay nightlife located on the southern tip of Ipanema, usually throws a ball or party just about every night. Also in Ipanema is the popular To Nem Ai on Rua Farme de Amoedo and the upscale and trendy Galeria G. Galeria G attracts an artsy crowd as it is an offshoot of the art gallery located next door.

In Copacabana, check out La Cueva, the oldest gay club in Rio. Also in Copacabana are Bunker 94 and Fosfobox. For more information on the gay nightlife scene in Rio de Janeiro during Carnival, visit the RioCarnival.net Nightlife FAQ page.