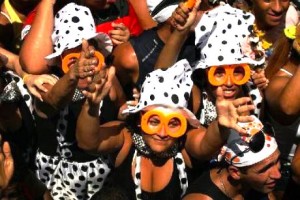 About the Bola Preta Ball

The Rio Scala Ball series kicks off with the Cordão do Bola Preta Carnival Ball, a party dedicated to the biggest and most popular street band of Rio Canrnival. Taking place the night before the Cordão do Bola Preta street parade, the ball will feature distinguished sambistas from the famous Bola Preta bloco playing the bohemian songs that make them some of the most recognizable artists in Brazil. Big names like João Roberto Kelly, Luiz Camillo and Dominguinhos are all expected to perform at the unforgettable Cordão do Bola Preta Ball. 2012 was the was the first year the Bola Preta Ball took place at the Scala Rio nightclub. After an amazing turnout, this ball is expected to become a staple of Rio Carnival history!

The colors of Cordão do Bola Preta are black and white, and the official uniform is any white outfit with black polka dots. Founded in 1918, Cordão do Bola Preta is the oldest and most widely attended street party of Rio Carnival. More than two million people take to the streets in Rio de Janeiro’s Centro to participate in the Bola Preta parade. The parade goes through the city center at Cinelândia, making its way down Avenida Rio Branco all the way to the Candelária Church. The big parade will take place on Saturday morning starting at 9AM and will run until around 2PM.

The Scala nightclub is a symbol of Carnival in Rio. The club moved from Leblon to downtown Rio in 2011, and is currently located right next door to the historic Municipal Theater in Cinelandia. With the switch to its current location, the new Scala nightclub increased significantly in size and now occupies a 3,000 square meters (3/4 of an acre) facility offering 3 ballrooms with a maximum capacity of 2,000 people. At the Scala Balls there will be multiple bars offering drinks and food.

Scala Balls offer two types of tickets: Standing and VIP. Standing tickets offer you access to the bars and dance floors, whereas VIP tickets include unlimited drinks from the bar (whiskey not included) and a buffet of sushi, fresh fruit, and other snacks. You can take a taxi or the subway to the Scala Balls, as the Scala nightclub is conveniently located less than 100 meters away from the Cinelandia metro station.