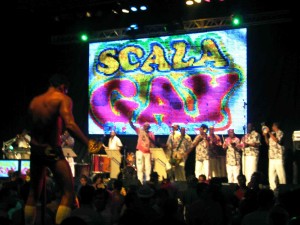 About the Scala Gay Ball

Held on Fat Tuesday, the final night of Rio Carnival, the Gay Gala Ball is arguably the most famous of Rio’s string of Scala Balls. LGBT people from all corners of the globe come to Rio de Janeiro, voted one of the most LGBT-friendly cities in the world, and join in on the Carnival festivities. An invaluable contribution to the energy and liveliness of Rio Carnival, LGBT people will be on the floats of the Samba Parades, on the beach, and at street parties — but the Gay Scala Ball is their night! Though designated a “Gay Ball”, everyone of all sexual orientations is encouraged to attend: it’s one of the many highlights of Rio Carnival!

On the night of the Gay Ball, the red carpet outside the Scala Nightclub is replaced by a pink one, as this notoriously fabulous event attracts huge crowds of drag queens and their admirers. The outrageous outfits of the Gay Scala Ball’s notorious “pink carpet” attracts the media and celebrities. Drag kings and queens vie for attention as they make their grand entrances into the Scala Nightclub.

Everyone is welcome at the Gay Gala Ball. Broadcast live throughout the nation of Brazil, the Gay Scala Ball is popular amongst people of all types and tastes. A tribute to the historic tradition cross-dressing of Rio Carnival’s early days, the Gay Costume Ball is a glamorous and unforgettable night of feathers and over-the-top costumes, where social boundaries fade away as Cariocas and tourists dance the night away in a state of revelry.

Rio Carnival offers a carefree and open environment where you are free to express yourself however suits your fancy, but the Gay Scala Ball is a night where this mantra is taken to new heights. The variety of exotic characters that show up to the Gay Ball is astonishing! Some people come dressed to impress, wearing ornate gowns or elaborate costumes; others will impress you by how little they are wearing! Either way, the Gay Scala Ball is a mesmerizing display of colorful outfits and personalities.

Held on the last day of Carnival, the Gay Gala Ball is the grand finale of all Rio Carnival events. The Gay Gala Ball is one of the most popular nights of the whole Rio Carnival Scala Ball series and one of the highlights of Rio Carnival. Standing tickets are available to those who plan on dancing the whole night, and VIP tickets are available to those who want more exclusivity: their own space at the club and dinner is included in the price. Tickets are hard to come by if they aren’t purchased well in advance. Make sure you secure your spot at this unforgettable night of euphoria! Book your Scala Gay Ball tickets now on RioCarnival.net. For more information on Gay Rio Carnival, visit the Rio Carnival Gay Guide.

For over 40 years, Rio de Janeiro’s Scala Nightclub has hosted Rio Carnival’s annual Scala Balls. A significantly more affordable option when compared to the exclusive Magic Ball at the Copacabana Palace Hotel, the nightly Scala Rio Balls refer to a series of six of Rio Carnival’s most famous themed dance parties, including the Red and Black Ball, the Mangueira Ball, the Long Live the Beer Ball, and the Marvelous City Ball.

The Scala nightclub is a symbol of Carnival in Rio. The club moved from Leblon to downtown Rio in 2011, and is currently located right next door to the historic Municipal Theater in Cinelandia. With the switch to its current location, the new Scala nightclub increased significantly in size and now occupies a 3,000 square meters (3/4 of an acre) facility offering 3 ballrooms with a maximum capacity of 2,000 people. At the Scala Balls there will be multiple bars offering drinks and food.

Scala Balls offer two types of tickets: Standing and VIP. Standing tickets offer you access to the bars and dance floors, whereas VIP tickets include unlimited drinks from the bar (whiskey not included) and a buffet of sushi, fresh fruit, and other snacks. You can take a taxi or the subway to the Scala Balls, as the nightclub is conveniently located less than 100 meters away from the Cinelandia metro station.