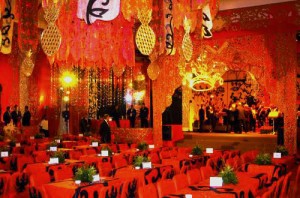 About the Magic Ball

The magnificent Magic Ball is one of the most famous of Rio de Janeiro’s legendary Carnival Balls and is widely regarded as the most extravagant affair of the Carnival season. Decorated according to a different theme every year, the Magic Ball takes place in the stately salons of the royal Copacabana Palace Hotel.

The annual themes of the Magic Ball are breathtaking. In the past, the majestic themes have included “crystal”, “little leopards”, and “butterflies”. And it’s not just the salons that are decorated according to the theme of the year. If you stay at the Copacabana Palace Hotel, the Carnival spirit will be inescapable! The entire hotel is transformed into a mystical wonderland, including each of the beachfront hotel’s 245 rooms.

Dance the night away alongside masqueraded celebrities and high-profile people at the most glamorous party in Rio de Janeiro. High fashion, five star services and a live band compliment a traditional Rio Carnival buffet, an open bar and the most elegant and lavish costumes of Rio Carnival outside the Sambadrome.

The Magic Ball is the most anticipated party of Rio Carnival and is attended by international celebrities, socialites and sports stars. The media and paparazzi wait outside the Copacabana Palace Hotel as the rich and famous arrive on the red carpet, each seemingly trying to outdo the other as they pose for photographers in the most glamorous of outfits. The who’s who of Rio de Janeiro’s socialites, politicians and businesspeople all come together to party at the exquisite Magic Ball.

Chat, mingle, drink and dance until the sun comes up at the legendary Magic Ball. You never know who’s hiding behind the mask of your dance partner. Attended by celebrities including Paris Hilton, Brigitte Bardot, Vincent Cassel and Gerard Butler, budget and schedule permitting, the Rio Carnival Magic Ball at the Copacabana Palace Hotel is an event not to be missed! Purchase your Magic Ball tickets today on RioCarnival.net!

The Magic Ball is the most distinguished event of Rio Carnival, so its important to note that the dress code is strictly Black Tie or luxury costume. Men should dress in a tuxedo or a suit, and women should wear an elegant gala dress. If you are not dressed in Black Tie you should come in costume. Donning a luxury costume will surely enrich and enliven your evening; however, if you are planning on attending the Magic Ball in costume, bear in mind that the event is an upscale occasion where Carnival costumes are held to the highest of standards.

Entire tables are available to parties of four or more, while seats at a table are available for smaller parties and individual guests. If you plan on spending most of the night on the dance floor, standing tickets are also available. Standing tickets will not provide you with an assigned seat, but there will be tables available on the gorgeous candlelit terrace, among other areas near the buffet. The majority of attendees at the Magic Ball are Brazilian. Visitors are more than welcome, but are requested to book their tables early.

The Copacabana Palace is a beachfront five star luxury hotel in Rio de Janeiro, Brazil. Since opening in 1923, the Copacabana Palace Hotel has ranked among the best and most glamorous hotels in South America. With its unparalleled views, exquisite dining options, a relaxing spa, and elegantly designed rooms and suites, the Copacabana Palace Hotel offers the finest amenities away from the bustling streets and beaches. A glance through the pages of the hotel’s “Golden Book” reveals a prominent guest list including Ava Gardner, Anthony Hopkins, Michael Shumacher, Nelson Mandela, Bill and Hillary Clinton, the Rolling Stones, Fred Astaire and Ginger Roberts. Each year during Rio Carnival, the hotel plays host to the spectacular Magic Ball, one of the most high-profile events of the year!