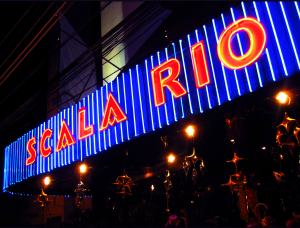 About the Scala Balls

For over 40 years and counting, Rio de Janeiro’s Scala Nightclub has hosted Rio Carnival’s annual Scala Balls. The nightly balls at the Rio Scala nightclub downtown are a staple of Rio Carnival tradition. A significantly more affordable option when compared to the exclusive Copacabana Magic Ball, the nightly Scala Rio Balls refer to a series of six of Rio Carnival’s most famous themed dance parties, including the Bola Preta Ball, the Scala Gay Ball, the Beer Ball, the Mangueira Ball, and the Marvelous City Ball. Whether you’re a sport’s fan, a beer-lover, a culture junkie, a fashionista or anything in between, during Rio Carnival, the Scala nightclub is throwing a ball for you! Book your Rio Carnival 2016 Scala Ball Tickets on RioCarnival.net!

The Rio Scala nightclub is a symbol of Carnival in Rio. The club moved from Leblon to Centro Rio in 2011, and is currently located right next door to the historic Municipal Theater in Cinelandia. With the switch to its current location, the new Scala nightclub increased significantly in size and now occupies a 3,000 square meters (3/4 of an acre) facility offering 3 ballrooms with a maximum capacity of 2,000 people. At the Scala Balls there are multiple bars serving drinks and food.You can take a taxi or the subway to the Scala Nighclub, which is located less than 100 meters away from the Cinelandia metro station.